Recently, my jacket lost a button. It is a new jacket. But, one of those fancy enough to have a small packet of extra button secreted inside a small inner pocket. I kept wearing the jacket with the missing button. Each time I wore it out, the same thought would occur to me (each time the thought was 'new'): Here I am, one of those proverbially mocked professors with a missing button on the jacket.

I have a long history with buttons. Many moons ago, many many moons ago, I sat at a dining room table and my mother told me that it would be best if I left for the US to become an engineer. It was a hard conversation for her; she thought I was too young (I was) and too much of a 'mama's boy' (this was okay). Shortly after this conversation, and many tears later, my grandmother took me aside and taught me how to sew buttons. This was part of a day long exercise, which included other exercises such as two different varieties of daal and kashmiri chai. The buttons exercise also included how to mend tears, and roll up pants trousers. The day remains etched in my sunshined memory as if it happened yesterday. We were hunkered on a charpai in the back garden, sheltered from the spring sun, but enjoying the slight breeze. I was sitting next to her with pinched fingers poking needle through the button. She was looking over my shoulder. When I was finished, she tugged at the button. This is really ugly she said. But it will do. Just remember, this is how they will get you. Who will get me, achchi amma? The gori. They will offer to cook for you, or sew your buttons. Now you have no need for them. You are independent. Listen beta, whatever else you do, don't bring a gori home.

Many homes later, I forgot that I knew how to sew my own buttons. 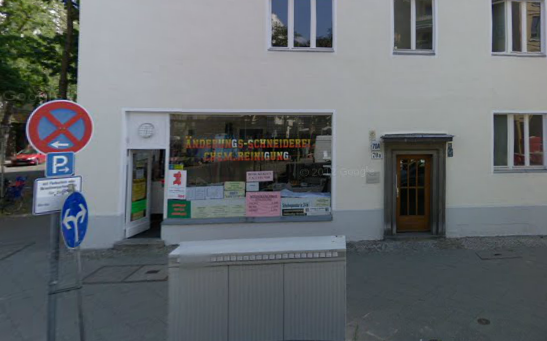 On my everyday walk in Berlin, I pass a small shop at the corner. It is a nondescript shop - a Schneiderei - with an older man always near the window looking up at the passerby. In the corner, at the edge of the window, sits a very old woman. I would always watch her, hunched over the sewing machine, her face inches above the pounding needle, her hands pushing the cloth. There was something incredibly majestic about her; yet inviting. She once was standing, and I saw her bent with age, with tremendous grace. I imagined her living in Berlin through the past 60 or 70 or 80 years. One day, she smiled at me as I walked by. This was unusual enough that I actually stopped. In my halting German, I said the only thing that came to my mind: Can you sew this button for me? (I could conjugate schneidern). She nodded and gestured me in. I took off my jacket. It was a brown corduroy coat that was missing two buttons. She tugged and pulled at each of them. The old man, in the opposite window, looked on impassively. I asked her if she has always lived in Wilmersdorf? She looked up, and said something that I did not catch. She patched up the coat, and my eyes got incredibly wet and I had trouble breathing. I left after paying her four euros, buttoned up my coat.

Three years later, I am in NY, walking down the street, and my fingers trace the absence of a button on this new jacket. At the corner, there is a Schneiderei. Compelled by the memory of my own tears, or is it my button question mark, I walk in. Behind the sewing machine is an elderly Japanese man. He has a very kind face, and he smiles when I take my jacket off. I hand him the small packet of extra buttons and he starts to sew it. I ask, have you worked here for long? He looks up and says: not so long. There is a half-cut suit sitting next to him. I pay him in four dollars. He had asked for three.

I learn this about love - at the city's street corner, there are those who can stitch you back.