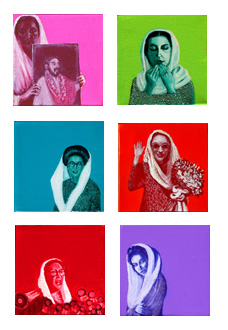 Benazir Bhutto has always been less than the sum of her parts - ah, but what spectacular parts! Just go look at this amazing series on Benazir done by CM Chief Artist-in-Residence lapata.

Perhaps no memory of my childhood in the 80s can compare to her triumphant return to Zia's Pakistan - the mantle of the anointed rested easily on her back then - all eager to be the 'Daughter of the East', righteously claiming a spot at the head of the table. Sure, she had a few religious detractors but she stopped shaking hands in public and got that dupatta aligned just right and married a suitable zamindar. It almost seemed like the cult of her father's personality would xerox off on her. But, then the reality of a neophyte outsider mired in corruption and nepotism truly blossomed on the Pakistani people and she lost her luster. Also her seats in power. Her latest return, greeted by violence, does not lend itself to nostalgia that easily but it continues the story of her reinventions.

In all, she has had sporadic success with trying to be a carrier of her father's legacy for the millions of PPP followers, trying to convince the West of her liberalizing leanings, trying to convince the mullahs that she is not an apostate, etc. However, to my casual eye, there is only one public persona that Bibi has truly excelled at - and I do not mean this in any snarky manner - and that is the persona of a martyr's griever. One can easily psychoanalyze that to her executed father, whose ghost continues to haunt Pakistan, or her dead brothers or the hundreds of victims of violence in the last 20 years exalted by the PPP....

[I want to note that this post constitutes # 1001 on CM. And I cannot imagine this ever happening without the help of the brilliant lapata. CM thanks her, and you, gentle readers, for sticking around.]

Congratulations on 1001! And also on making sense of a style of personality politics with which I have no facility whatsoever.....

Congratulations on the hazaar-aur-uske-oopar-ek posts! And this is Lapata's series best yet. I love the last purple one (lots to psychoanalyze in that come-hither glance!), but the green praying one, with the two different greens and the glitter below is just lovely.

Mubarak on Aik plus Hazaar Dastaan Re BB check this out http://www.youtube.com/watch?v=y6Rs20Lg21Y

Thanks Sepoy! And thanks DK for the glitter-appreciation... The series is still in progress, so check back now and then for new entries. In fact, there's a new one there now.

I realize that BB is perpetually for sale...but are these paintings for sale? I would be interested in more info. Heard about your blog on Democracy Now...I'm an instant fan.

MM- They will probably be for sale eventually. We're looking for a good non-virtual venue to do a show, and after that, there is the possibility of prints for sale. We'll keep you posted on CM.