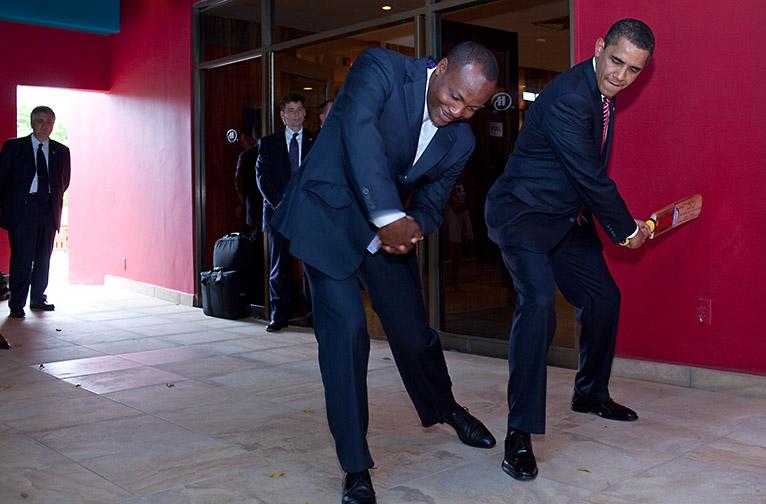 Things have been dour here, lately. I was thinking we needed to talk cricket, today. And, as if by magic, dear e. sent this awesome shot of President Hussein getting schooled by Brian Lara (Mr. 400).

The IPL has started in South Africa. India's biggest sporting event was moved due to security concerns to SA. The first few matches have already pit Shane Warne, Kevin Pietersen and Andrew Flintoff against each other. I think no one won. I will try and catch some on youtube or elsewhere. The IPL Page 2 site from cricinfo is quite, um, interesting?

In happy news, let it be noted that Afghanistan will be playing international cricket! As Hamid Hassan right writes, It is the most famous day in the history of Afghanistan cricket.

In sad news, Pakistan lost the chance to host the 2011 world cup. Read Osman Samiuddin to get a sense of the loss.

I think what's most notable about this picture is what a graceful cricketer Brian Lara is even in formal wear.

And WHAT is he doing with his rear?

dude, i had never seen the photo-essay on the Chosen One's cricket camp! how could i have missed it?

agree with Vivek - Lara is so graceful even in that still shot!

I thought my footwork was dodgy.

Hi , Salam to all viewers . Mr.Hussian you are a wonderful politician but Sorry You will never be a good crickter.mmmmmmmmmm not a good foot work ........... Brian Lara ( you are the legend) no doubt..... did brian lara really accept Islam???? i hope that he accepted ....

yes he has accepted ISLAM ....i read it in wikianswers web page

No reliable news about the acceptance of islam by Brain Lara yet.

[...] maintained its presence in my childhood in many forms, be it book cricket in classroom, or make-belief cricket in living room where I would stand in a corner and pretend to be this or that international batsman [...]