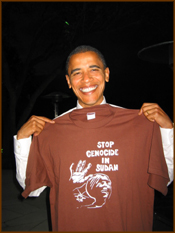 Barack Obama appeared on NBC's Meet the Press today and acknowledged that he is now considering running for Prez in 2008. Looks like Oprah's campaigning is paying off-- let's hope she can influence elections as much as she can booksales. He's out on the campaign trail right now, stumping for the November election and his new book, which is #1 on Amazon today. This guy is outta control, he's got every voter base covered. Some quotes from the Larry King transcript:

KING: What do you make of all of this, Senator? You're on the cover of "Time," the book is out, everyone's talking about you what's that like?

OBAMA: Well, you know, it's a lot of fuss and, you know, fortunately I've got a wife at home who is more interested in whether I rinsed out the dishes and put them in the dishwasher, which you know I think keeps me grounded.

KING: David Brooks, the conservative op-ed columnist in "The New York Times" wrote a piece today asking you to run. If fact, the headline was, "Run, Barack, Run." He says you should run for president for the good of the party because of your age, because of your world view.

OBAMA: It's very flattering and I think maybe what, you know, I've tapped into and some of it, as I said is luck and happenstance and timing, but hopefully what I've tapped into, and this is what I tried to write about in "The Audacity of Hope," was the idea that there are a set of common values and common ideals that we all believe in as Americans, whether we're Republican or Democrat or Independents.

And that if we focus on what we have in common, rather than what divides us, that we can actually make progress in common sense, practical terms on some of the challenges that we face in the country. And, I think that tone is one that the country seems to be hungry for right now.

KING: What do you mean by "The Audacity of Hope?"

OBAMA: Well, you know, I got that title from a sermon that my pastor gave probably 18 years ago. I was a young community organizer on the south side. I attended one of the first church services that I had attended at this church and my pastor, Jeremiah Wright, Jr. (ph), at Trinity United Church of Christ, had this sermon called, "The Audacity of Hope."

And, his basic premise was, look, in our community we see poverty and despair and crime and drugs. In the world you see war and famine. And so, sometimes it's hard not to feel cynical and to feel a certain sense of despair and feel that we can't make progress.

And, it's precisely at those times that I think we have to rely on that audacious, risky sense that, in fact, things can be better if we persevere, if we push forward.

And, I think there's a strain in the American character that has always been like that, has always been fundamentally optimistic and believe that there's no problem that we can't overcome in some fashion.

"heâ€šÃ„Ã´s got every voter base covered." In other words, he's a slick politician that refuses to take a tough stand on any issue.

Ouch! Someone's not feeling the Obama-rama magic! And...um...do people who aren't slick get elected to office? Because that would be awesome.