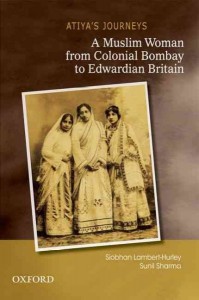 I have been doing some translation work on Shibli Naumani for a small project. He was a major historian of early Islam who published seminal works in the early 20th century. He was also a committed reformist who wanted to modernize "Muslim" education. But reading around on him, I got to read his letters to Atiya Fyzee. That is her in the photo above, seated center. It is taken from a work of musicology that came out in 1925, The Music of India.

The daughter of Haji Hasan Ali Afandi, she was born in Istanbul in 1876 (d. 1967) and was the first Muslim woman to go to London for higher education, to pen a travelogue/memoir of her time abroad, to forcefully advocate for gender equality, to write on musicology, to become a muse for Shibli and for Iqbal. She is now largely forgotten (and mis-remembered since that article confuses her with her sister. Delacy in the comments!).

In 1906, Atiya Fyzee left her home city of Bombay to spend a year studying at a teacher's training college in London. She was certainly not the first Muslim woman to travel to Britain, but she certainly was the first to have penned her observations of Europe. Her travelogue (Roznamchah) was firstly serialized in the Urdu women's journal, Tahzib un-Niswan from Lahore, then published in book form under the title Zamana-i-tahsil [A Time of Education] in 1921.

That remarkable journal is now translated into English by our very own Sunil Sharma and Siobhan Lambert-Hurley as Atiya's Journeys: A Muslim Woman from Colonial Bombay to Edwardian Britain.

They are also interviewed by WSJ here:

IRT: As historians, what brought each of you to her?

Lambert-Hurley: Atiya was an extremely fiery, colorful and accomplished womanâ€”all characteristics that make her a very attractive subject for the feminist historian! Until the final years of her life, she was also relentlessly itinerant, traveling on numerous occasions to and across three continentsâ€”Asia, Europe and the Americas. This peripatetic quality made Atiya especially interesting to me, first of all, as a scholar interested in travel and travel literature as a means of recovering the Muslim female as an actor in world history.

Sharma: As a literary historian, I was drawn by Atiya the muse who figured in the lives of two prominent figures of Persian and Urdu literature. She inspired the venerable Maulana Shibli Numani to write numerous ghazals (ballads) in Persian that included a veiled reference to her. Iqbal, who is thought to have been besotted with her, also wrote a lyrical poem inspired by her. Their letters to herâ€”her letters to them do not survive or have not been made publicâ€”are amazing documents in the history of friendship.

Needless to say, I have been waiting for this translation to come out for a few years and now cannot wait to have my copy. Also, now maybe we can request Prof. Sharma to return to the eleventh to the fourteenth century where we really, really need him.

I first read about Atiya Fyzee about 30 years ago when I found a book on music and a play written by her in my family collection of old books. Ever since I have had a great interest in her life and found it fascinating. It is amazing that so little information is available about a person like her. The fact that she lived and died in Karachi and there is no mention of her anywhere. This is how women who are exceptional and different are so easily forgotten. I have met some people who knew her and from their account she seems to have been an extraordinary person of great charm and intelligence.. Both Iqbal and Shibli were supposed to be madly in love with her. I really look forward to reading this book.

In all underdeveloped countries women are treated as commodity, some more valuable than others, but disposable, nevertheless. In Muslim countries, there is implicit religious sanction. In feudal and tribal societies, and Muslim countries are largely afflicted by both, there is explicit sanction. I lived in Karachi from 1954 to 1965 and again from 1983 to 1991. In the first period I recall hearing about Atiya Fyzee but never a word in the second period. Surprisingly the devotion of Shibli and Iqbal to the lady was described in an admiring fashion even in those conservative times. Now there is regression

On cannot help getting enchanted by this free-spirited lady. Her accomplishments appear even more commendable when looked at in conjunction with the fact that she came from a Bohra Muslim clan- theTyabjis, whose women still are typically veiled. She has been been reported to have told Iqbal on he departure from London "I want you to feel my presence in London even in my absence". Her friendship with Shibli Naumani, Iqbal and others, may have been more talked about, but Jinnah and Atiya had a tremendous mutual respect for each other as well. In fact, it was on the Quaid's insisting, that she left her palatial home in Bombay to move to Karachi in 1948, where she lived for almost thirty years and died. We need to provide greater exposure to the works of this amazing woman. This book may have lit the torch.

Another of "quaid" sahib's victims! Though its likely he imagined people would go back and forth quite normally, not having foreseen what his experiment was going to lead to... We need more information about her life in Karachi. Who did she live with? what were her activities? Did she ever go back to Bombay for a visit? All you Atiya Faizee fans must have dug up something by now, or is there nothing available?

I am indeed very sorry to note that we have treated Atiya Fyzee with utter cruelty and harshness. She was invited by Mr. Jinnah to come to Pakistan and was therefore a guest here and not a refugee but she was treated very cruelly by the government. She was evicted from the house allotted to her and passed very miserable last years of her life. We have virtually abandoned her totally. Her life is 'mishal-e-raah for our women. She passed her last days in Karachi and yet today no one knows her. It is time we make amends and highlight her life and works.

As per my late uncle's (unpublished) memoirs, in her final days Atiyyah Faizee used to visit Karachi press club everyday at tea time and surreptitiously bag food at the lunch table