[You may know that CM has long had an official Archivist - a person who has helped maintain the Facebook page, and helped me cull through the huge archive for posts and materials. You know him as Salman in the comment sections, SalmaanH on twitter, and patwari as author on CM. This is a first in a series of posts on CM where he will highlight various themes from CM using his own narratives - it is one way to keep the archive from being less a silo and more a quilt. We want to thank patwari for this, and for continuing to be part of the CM family. Love - sepoy, lapata, (that farangi)]

Cricket maintained its presence in my childhood in many forms, be it book cricket in classroom, or make-belief cricket in living room where I would stand in a corner and pretend to be this or that international batsman reeling off six after six, or indoor cricket with my brothers. Sometimes even abbuji played cricket with us in the veranda and bowled underarm to me. But soon enough, my brothers started going out to play street cricket, which I was not allowed to do yet, leaving me with not much to do besides riding my tricycle in the veranda, or nibbling on my mother's decommissioned dupattas.
Taking note of that, one day my father had me hop onto my older brother's bicycle and had me paddle as he held on to the carrier at the back of the bike. I could see abbuji breathing heavily as he tried to keep pace with the bicycle. Then, unbeknownst to me, he let go of the bicycle. I paddled for a little while before realizing that he had let go, at which point I looked down at the ground below and the cycle-handle wobbled in my hands. I must have been about to fall when abbuji called out, “Keep the handle straight and keep paddling. You are doing fine. Kuch nahin ho ga.” 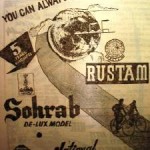 It wasn't until 9th grade that I got what I considered a man's bicycle —a 20+ inch Sohrab. My best friend and I would ride all evening, from one friend's house to another, going to our tutor's house and taking our sweet time in getting back. As the span of my bicycle trips increased, so did my sense of self and of the world around me. It is to that combination of boyhood and freedom to explore I return when I read about bike rides.