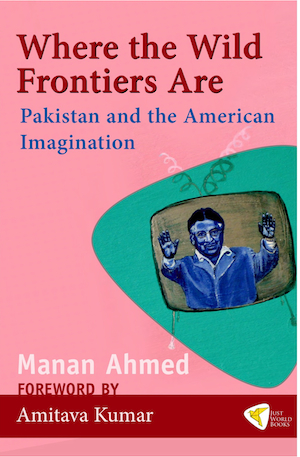 It has come to this. On or about May 31, 2011 you will be able to purchase Where the Wild Frontiers Are: Pakistan and the American Imagination - a curated, edited collection of my posts from CM and elsewhere. Some fine folks have contributed immense amount of their time and talent to make this happen and I am still a bit unsettled about it.

CM was a space invented for an imaginary audience by a frustrated (and easily distracted) graduate student. From its beginning, it was consciously an "academic blog" and I participated in many forums (online and offline) about the meaning, the mode, the future and past of "academic blogging" [curious folks can look up this and this as two early examples]. One part of this engagement was my insistence that "blogs" were a publishing venue which democratized a certain aspect of academic speech. Another part of this engagement was my deep unhappiness in the way it handled archives. They vanished - relying solely on the Search box or the vagaries of Google. Back then, Google was good.

Helena Cobban, at Just World Books, had a brilliant idea in producing curated books from blogs covering timely subject-material. Joshua Foust, of Registan, was the one who introduced me to Cobban and she was enthusiastic about the possibility of CM existing as a published archive. After some massive help - the first foray into the archive jungle was done by Farangi and SalmaanH and, put together by Sabrina S. - I was able to put together a somewhat thematic coherence to the book. Another round (or was it two) of editing happened.

My dearest friend and co-blogger Lapata, then contributed her art for the book (and the cover). Amitava Kumar generously agreed to write the foreword (which is humbling!) and some other people who have way more things to do than time to do it in, agreed to blurb it.

You will, certainly, hear a lot more here about the book and I will certainly beg and plead (not now, though) you to buy a copy. It is launching in the US first, but there will be a e-book version and I am keen on getting it published in Pakistan/India (if you know someone who knows someone etc...)

Great news. Mubarak. I expect a signed copy (paid for by me :)) en route soon after its birth.

Wonderful - Mabrook. I expect my *autographed* copy (yes, paid for by me) next time you are in town: http://nyti.ms/kMSOKE

Wow, this is really great. I'm really happy about this book. I'm really, really looking forward to reading "Where the Wild Frontiers Are". Good job Manan.

Woo hoo! Best news I've heard in days. Many sincere congratulations Manan, and my gratitude to all who helped make this happen.

Congratulations, Manan - this is wonderful news!

Many many congrats! Let me share a poem with you on this occasion in the hope that Pakistan will change for good until you write your next book. The Kakul Syndrome (for the silent revolution in Pakistan) By Habib Sulemani God Almighty! Generals fake They've put country at stake Generals mean personal gain The armed forces're in pain! Generals're bloody fool Take a bath an' be cool! Military men're public servants Not masters from the heavens! But they're arrogant an' cruel Don't care for common people Generals're bloody fool Take a bath an' be cool! You own huge firms an' agriland Turning country into terrorland! No-one among you bothers at all Where the terrified people stand! Suffering from the Kakul Syndrome You're always outâ€”even if at home By providing terrorists sanctuary You've failed to protect country Still you behave like intellectuals Not men behind petty squabbles! You've lost every single battle Yet foolishly believe: you rattle! Generals're bloody fool Take a bath an' be cool! After failure on geographical borders You champion ideological frontiers It's easy to fight on ambiguous front Cos you like a lavish bedroom stint! Using a pawn religious leader Or an ISI-paid TV anchor You can make storm in teacup Change systemâ€”down to up! The generals've taken refuge In ideological war an' abuse! Don't try to fool world anymore! Don't you see outside an uproar? Generals're bloody fool Take a bath an' be cool! See the writing on the wall Only you're sick not we all The military is vanguard Of a scary fanatic world! The nation wants to know your aim You've multiplied the double game! You're soldiers or businessmen? Playing tricks on the politician! You didn't defend country borders With broken oath, you're traitors! There is no escape from the law Dug earth with your filthy paw! You can't deceive the tax payers God has heard people's prayers! You've lied to the nation Not once, again an' again You've neither mind nor a soul An' you're always playing foul! Generals're bloody fool Take a bath an' be cool! It's time to take a dose of wisdom! Stop violation of our basic freedom Respect democracy at home Or face the doom an' gloom!

[...] the publishing of “Where the Wild Frontiers Are: Pakistan and the American Imagination — “a curated, edited collection” of sepoy's posts in book form, with foreword from Amitava Kumar, launched with much fanfare, [...]