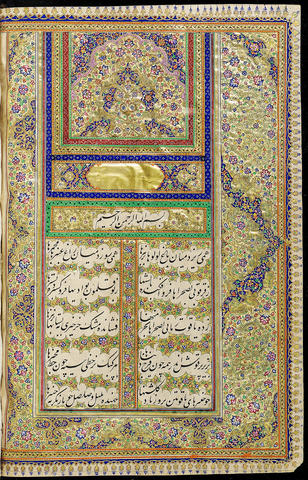 The Lord be praised — for autumn's month is here,
The month of shrinking and swelling vineyards.
So much do they harvest and heap the grape
Now the vineyard teems like the milky-way.
For when the grape leaf, rainbow-like, is many-hued
The rainbow seems to hold grape clusters.
Blue purses hang from yellow leaves,
In each blue purse a largish seed of grape-flower.

And in the heart of that seed's vinous flower
Are hidden ten sacks all concealing musk.
And that fruit's as if it were someone unwell,
Of double aspect among all its limbs and body, One of its cheeks yellow, the other red.
Of them one's breathless, the other jaundiced.

That pomegranate's like a pregnant woman
And in her belly — a fistful of sons.
She won't give birth until you beat her to the ground.
And when the child's born its birth's the same as eating it.
A mother gives birth to a child, or two or three.
Then why's this pomegranate a mother of three hundred?

Until a mother doesn't deliver her womb of her child
She doesn't lay it on the bed, this much is obvious and no secret.
In her womb has she prepared for the child a yellow bed
Within which is apparent a child's form.

Now shall I speak of the grape-child's qualities
Each of which it contains to excess.
Like a woman is the grape musk-colored
And has a belly like that of a musk-vessel.
Within its belly are one soul and three hearts
And each of its three hearts is three bone-bits.
They say an animal has a soul in its heart.
But it has a bony heart and life and soul.

I'd never known the soul to have a color but its soul
Is the color of a poppy in a poppy-field.
The soul's odorless but its perfume
Is like that of musk, ambergris and willow.
The grape is black and like the moon unsurprisingly
For blackness describes the moving moon.
It's fault is no other than that it's grown pregnant
When yet only a fresh young girl.
It grew pregnant without a husband like Mary

But this tale's pleasanter and more remarkable than that.
For while Mary grew pregnant by the mouth
This daughter of the vine has neither lips nor mouth.
'Imran's daughter [i.e. Mary] was pregnant with a son
While the grape's daughter's pregnant with a soul.
There — the soul of the lord of all the world's creatures.
Here — the wine of the lord of all the world's creatures.
If the Jews resolved to kill Jesus
On killing this one are all Muslims resolved.
The former they seized, tortured and killed.
The latter too they seize and torture — how is that?
The former raised the dead in ones or twos by miracle.
The latter revives the soul of all the age's people.
That mortalâ€like immortal was the Holy Ghost.
This mortalâ€like immortal is a creature.
Look how that one suffered by their killing.
Look how this one suffers by their killing.
That one, after the cruelty, was delivered of all pain.
This one, after the cruelty, is delivered of all pain.
That one found a place in heaven while this one
Takes its place in the hands of commanders and viziers

Such as the hand of the vizier of the king of the East whose hand
Is heavy, not with wine, but with magnanimity.
The sun of viziers, Ahmad Abdus Samad who
Is not only the sun of viziers but the sun of all men.
That forebear of all the world's forebears,
Like the vanguard of a straight spear from Khatt,
Greater than all the world's men by two details
Is he, greater by two: by his heart and by speech.

Such tearing and sewing by the pen's tip you'll never see,
Tearing and sewing by pen-tip and finger.
By his bounty did everything probable grow certain
And whatever was certain in his lineage is probable.
He's not narrow sighted for narrowâ€sightedness
Is wretchedness and weakness in the affairs of the great.
Bestowing dinars, he claims a noble reputation
Knowing that time in all events is passing.
To the nobles and attendants of the world's king
Is he both bestower of wealth and its claimant.

For the kingdom's like a body and in that body
Are these attendants veins and arteries.
The physician's duty lies in recognizing the vein
How it is when pulsing and how when not.
When it's pulsing he weakens its force
And, if not, there's fear of choking by inflammation.
When it's not pulsing he administers strength
Or else the kingdom's heart risks jaundice.

To the gnat of cruelty and sorrow is he a great elephant
And to the ant of corruption is he a fierce lion-cub.
The king's the kingdom's body and he its heart.
The kingdom's like the Qur'an and he its meaning.
The kingdom's like a meadow and the peasantry its herd,
The king's the sheep-capturer and the minister the shepherd.
The army's like the sheep-dogs and the enemy like the wolf.
And this business of dogs, wolf and sheep rests with the shepherd.
A shepherd looks over us so nothing disturbs the sheep.

Neither is the wolf safe from him, nor are the dogs exhausted.
Never with the weak is he severe
Although you know him to be severe.
Till on the highest and lowest scales does sound the melody,
Till on the flowering tree sings the wild pigeon
May his life and person find neither equal nor limit
As knowledge and greatness are without equal and limit.
May he rest in spring for as often as spring returns.
May he rest in autumn for as often as autumn returns.