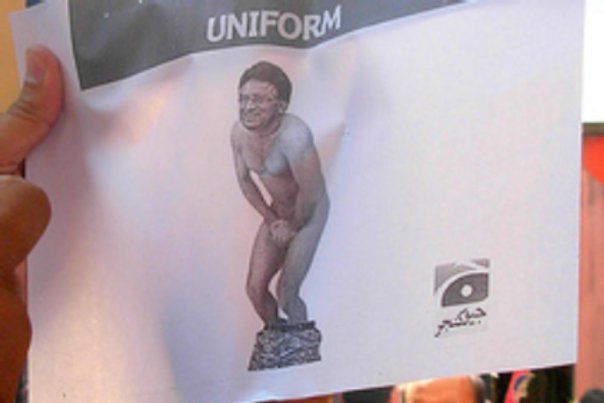 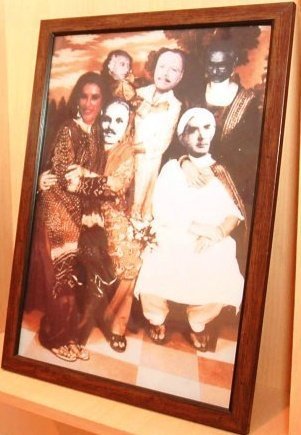 Shanakht was a festival of arts and performance, organized by Citizens Archive of Pakistan[website now 404] which was attacked by the workers of Pakistan People Party because they were offended by one of the images displayed here. You can read a rundown of the event here and a sobering editorial at Dawn for background.

I expected the Pakistani blogosphere to universally condemn the hooligans of the reigning party who perpetuated this violence and stand with the artists' right of self-expression. I certainly do. But, the Pakistani blogosphere seems to be universally condemning the unknown artist, instead. It is, they say, "akin to a political blasphemy" or "ridiculously meaningless" or "monumentally stupid". Their critiques of the artist and of the festival organizers, directly or indirectly, condone the violence that shut down the festival.

Satire, through crudely photoshopped images and cheekily assembled youtube videos, was the proverbial engine behind the ouster of Pervez Musharraf (head photoshopped over an Abu Gharib image, above). It has not stopped. Almost daily, I get emails and txt messages which poke fun at Zardari. Any yet, Lord help us if anyone puts up a roadblock to the sanctification of the martyr'd Benazir Bhutto. Puhleez.

What happened at the festival was a shameful example of a civil sphere that has neither the language, nor the space, to have dissent without violence. It isn't "talibanization", it is the "ghundafication" of Pakistan. And it continues with tacit support of our so-called liberal intelligentsia.

I totally agree with you. While one can argue that the picture is tastless or offensive to some people, the artist absolutely has the right to freedom of expression and shanakht has the right to display it. You can express your unhappiness with the image in other ways than rioting and shutting down the festival. I feel one should not speak ill of the dead, but it is legitimate to criticize or satirize their policies. Making a martyr out of BB is totally ridiculous (recently at a Laal concert, she was called the "mother of the nation" which makes no sense whatsoever).

Mushy got some serious triceps! To be fair to the bloggers, they probably all condemn the ghundagardi. They just skipped past the condemnation and went directly to the question of: what are smart ways to conduct ourselves in this atmosphere of ghundagardi? There is no one correct answer to that question. People who live in that society have to pick their battles carefully. I am also amazed by the instant deification of BB. I just hear Imran Khan going off about how the shaheed was his good friend and on a noble mission.

Re: "...they probably all condemn the ghundagardi. They just skipped past the condemnation and went directly to the question of: what are smart ways to conduct ourselves in this atmosphere of ghundagardi..." I wouldn't be too sure: often, people simply go through the motions when they condemn the violence, but breeze past it and start talking about underlying (and supposed) wrongs. This is a classic technique, and I am inclined to question its good faith...

i was amongst those who commented on a blog that the piece of "art" was tripe. to be fair, i felt that it was so obvious what the jiyalas did was wrong that there seemed to be little point in going on about it. my only dismay was that it just was such a half baked effort. i mean, take a look at the two pictures you have posted. one is hilarious, the other is trying too hard. i felt that this was a low point for pakistani art as much as it was for our society. because if a picture is going to be provocative, it doesn't have to do much. but if it is going to be considered as art, it should hold itself to perhaps a higher standard. maybe i don't get it, or am being too judgemental. i like to think that if i was alive in the 50s-60s, when both the progressives and the state hated and bullied Manto, i would have stood up for him because his stuff is amazing. would this image age just as well as a Manto short story? somehow i doubt it, but if i am proven to be wrong, then i guess it is i who is clueless...

kk: I am afraid we don't all get the luxury to defend Manto. The artistic merits of this photoshop is rather besides the point. What is not obvious, and isn't besides the point, is a defense of the artist's right to expression, CAP's right of assembly and a civil society's right to not have machine-gunned hodlums become art critics.

Well said: since only a fraction of art ages "well", and it is impossible to tell which will or will not age well (if someone had said in late-19th century America that Longfellow would be forgotten or sneered at in eras to come, and the utterly unknown Emily Dickinson or the only slightly better known Walt Whitman would be hailed as among the greatest writers in the language, one would have been committed to an insane asylum), leaving aside the principle of the matter there is a practical problem with saying only "good" art should be defended vigorously. And here's the other issue: while one could see this as a symptom of the general thuggishness and intolerance that we see around us (see, e.g. http://qalandari.blogspot.com/2005/08/shame.html), it is also possible to detect something more, namely the continuing cult of the family/dynasty, the shameless use of the trope of martyrdom (and even beatification) -- these are all destructive of democracy and democratic habits, and in a sense more destructive of them than the likes of Musharraf (because it is harder to mobilize against them), and thus forums like the Shanaakht forum are all the more to be supported, because they are willing to wield the pin to prick various balloons. The stakes are all the higher because this is the PPP we are talking about, and whatever one may say it was historically the most populist and potentially the most progressive of all the major Pakistani political parties -- to see it reduced to a neo-Shiite cult of the family is galling.

You have drwan attention to my calling a piece of art 'ridiculously meaningless'. Thi is not an act of condemnation but of criticism, to which I am entitled. It is an expression of an opinion - at par with the artists right to express her view which has, since, been interpreted by many to have deeper meaning). Apart from saying, in the same post - that "None of this is meant to condone the aggressiveness and violence, threatened and carried out (at least to property) by the PPP jiyaalaas." I did not dwell on this because it was obvious that this act would be universally condemned and not supported. (Wrong again. One email that was forwarded to me gloats over the jiyaala action and there must be other warped minds too.) My blog posts are not news coverage and analyses of everything. Violence and such idiocies I have written about, often, so my POV is known to regular readers. As someone who was participating in the festival my post - and subsequent expressions off opinions on various FB pages - I chose to write about the flaw of judgement by the organizers that seemed to me to have been instrumental in endangering people and property. I also addressed the fact that I felt, as a strong feminist, that the issue was not just BB but women. Of course people manipulate images. I do, too, I just do not agree with this usage of it. That, too, is an opinion I can hold, I suppose. Having supported freedom of speech and expression for years I reiterate that all artist have every right to express themselves in every which way - and, in the same post, expressed my objection to the 'censorship tack' that the PPP leadership was following. While I believe that a lot of focus is being placed on the goondaism that a handful of idiots displayed, an act that was condemnable, but momentary and very contained - one that pales in comparisons to the numerous far greater acts being committed today - the issue of censorship that I pointed out holds a much longer-lasting danger. Already, the registering of FIRs against CAP members has shown what this can lead to. All mistakes are not crimes. I would, despite my initial criticism of them, stand totally behind them and hope that the rest of their wonderful work will be able to continue and next year's festival will be a success! (BTW, like many who had to run for safety or were helping people collect and remove their goods, I did not become aware until much after writing the post that the entire area that contained the artwork was all ransacked, otherwise the goondaism issue would have been addressed in stronger terms.)

[...] - many valid points have been raised - but I am pained to be included in a group that one blogger writes about “… and it continues with tacit support of our so-called liberal [...]

Voices against the crime of ruining our Shanaakht « The Musings Out Loud of the Child Within | April 12, 2009

And it continues with tacit support of our so-called liberal intelligentsia. There is unfortunately, nothing 'liberal' about our intelligentsia in South Asia. Apart from some isolated pockets, it has ever been thus imo.

Voices against the crime of ruining our Shanaakht | Tea Break | April 12, 2009

"There is unfortunately, nothing 'liberal' about our intelligentsia in South Asia. Apart from some isolated pockets, it has ever been thus imo." There's a difference between intelligentsia who express views on blogs and newspapers, and those who actually try to organize art festivals and other cultural events. It doesn't take much to do the former, but to continue to promote real-life activity in an atmosphere of violence, incremental changes are what one can expect. What Mr. Kidvai seems to be pointing out is that one has to go beyond the condemnation (which, may or may not have any lasting effect), and make sure that practical problems are addressed. i.e. It reminds one of the self-censorship that exists in Iran. There has been an explosion of intellectual activity in Iran and that has been caused by ensuring that satire, criticism etc is expressed within realistic bounds. Clearly, this has more benefit by creating a mass movement slowly but surely. Once, a spirit of awareness is created, one can indulge in the luxury of "shock" and "awe". Otherwise, all you've got is a martyred movement. As Mr. Kidvai seems to have pointed out in his blog the real danger is that governments will use this as an excuse to indulge in greater censorship. Thus, it could be self-defeating. Tread softly....

Just asking while we are talking about freedom of speech and expression is it possible to display picture of Altaf Hussain instead of Benazir Bhutto in Zia's lap? After all he is the true beneficiary of Zia's tactics. That art show has favored one party and MQM is using every means to clean her dirty past but they need to learn to do it truthfully and gracefully, which is I guess is a lot to ask.