Pakistan is in dire straits. It is a nation at a crossroads. Extremism is around the corner. The politicians are corrupt. The nukes could end up in the hands of bin Laden.

Pakistan is in dire straits. Its people demand accountability. Those who claim to protect it and make it prosperous seem busy keeping themselves in power. There is no hope for change since the people have no power. They are stuck under a dictator. If the citizens of Pakistan are to be real agents of change, they need a way forward. They need democracy.

In March of 2007, when lawyers came out on the streets, there were only two available narratives. Those who held a results-based approach argued that Musharraf's dictatorial regime was the best case scenario, the lesser of the two evils. The evil being, of course, justice, accountability and democracy. They raised the specter of rampant jihadism spreading through the populations. They pointed towards the economic development that had occurred on Musharraf's watch. They warned that Pakistan had some amazingly corrupt politicians. And that US needed a stable ally, a dependable ally, in our war against terror(ism).

Then there were those of us who trusted the people of Pakistan. We knew that jihadism is not some air-borne virus that people can contract by simply inhaling. We knew that it wasn't Musharraf who had brought about economic development but the people themselves. We knew that politicians are corrupt everywhere - including the US - so why the exception of dictator for Pakistan? We knew that a partnership can only be among equals. And the will of the people needed to be heard.

Ah. But this so-called Lawyer's Movement was a big sham, we were told. These are just elites. Where are the "people"? Why can't the Lawyers bring out the masses? Why do they insist on democracy and justice when the people are more concerned with food and security.

Well. Pakistan just had a slow-burning, people-powered, secular revolution and they forced a sitting dictator - who had the complete confidence and support of the only superpower in the world - out. Peacefully. Without any bloodshed. Without any crazy mullah grabbing the nukes and blowing up the world. Without inflation hitting 10,000,000%. Without any riots. With suicide bombings in Lahore. With two regions embroiled in near civil-war. With the same corrupt politicians in charge. With the unshakeable faith, the belief, that they deserved justice. That they deserved the right to have the power to act. That they were citizens of their country, not keeps.

This is unprecedented. This is historic. This is a momentous time in the history of this nation. It has successfully forced accountability - through peaceful and legal means - on its leaders. The people of Pakistan - lawyers and all - have exercised their agency.

And like every other such exercise - be it the election of 2000 or the upcoming election of 2008 in the US - the outcome is up in the air. And hence, the hope is not in the fate of this particular dictator, it is in the accountability to the Pakistani publics, of their representative. If we really want a secure ally in Pakistan, we would do our best to strengthen the people of Pakistan.

PS. Catch me on Worldview with Jerome McDonnell. 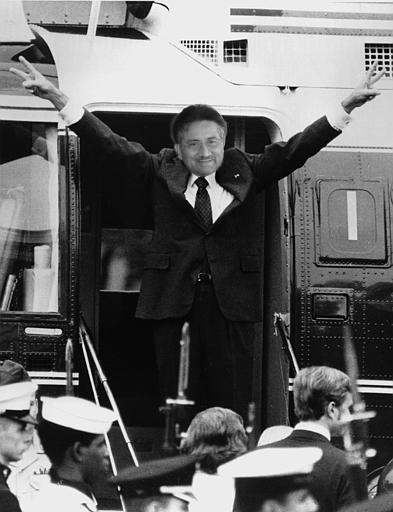 Now its time for the "I am not a crook" part of this Nixonian drama. Now where did the six billion dollars of US aid go?

I welcome the removal of Musharraf al rajeem, but I expect that Zardari bhai will have his way and either there will be no restoration of judges or the restoration will be such a farce that no good will come from it. That is really sad because such failures breed cynicism and Pakistan is already suffering from an idealism deficit. Unfortunately, it looks like the country will continue to stagger along, surviving as a rent-an-army state available to the highest bidder (usually the US, but willing to perform important service for China and Saudi Arabia). For better days, we may have to wait another few years till the new generation takes over; I do have high hopes of this generation because I look at my nephews and nieces and their friends and I am impressed. They are much better than we were. And the generation above us was definitely worse....so in some ways, things are getting better, but slowly. Strangely enough, as social norms and cultural standards decay, people are actually getting smarter and their expectations are higher!

Whatever that has happened I hope and pray that Pakistan truly gets what it deserves since ages now, a leader that thinks for the country rather than his own pockets like most of them before.. Ameen

I think reinstating the judges is a make-it or break-it issue, no? I really can't see room for compromise here.

Musharaff did his job. He had to go, and he went peacefully so i believe he realizes he hit the end of the road. So he is not some monstrous dictator that this site makes him out to be. He is rather a practical, pragmatic man. Democracy has survived in Pakistan, and he is the first real leader to confront the Northwest territories. I think the punjabi centered viewpoint that this site, and many others wish that the gov would stay out of there, and continue to let the people live in the stone age. Something similar to the tribes in African who are left undisturbed. It's a shame really, do the borders of the country mean anything? If anything, Musharaff has forced that question on the country. His accomplishments: economic progress direct confrontation with Islamist revolutionary activities The strengthening of the army Removing the label of pariah and bastard step child of south asia to a respectable country in the court of world opinion Putting Pakistan on the side of the World's only superpower, while still mantaining very good relations with an emerging one (china) -- History will vindicate him

But the job is not even half done. The Zardari PPP, beholden to the US and hoping to make new billions in corruption, has completely destroyed the superior judiciary by messing up the issue in such a way that no solution remains possible or likely (what in Punjab would be called "gundaa ker deyo"). But the ice is cracking, and inshallah the cracks will spread and one day soon, this set of bastards will also slip under the thin ice...

That was great ! , its really nice to listen to the views and comments here about that what happened. looking forward for new posts from you Sir Manan