For my recent column on Bookslut, I approached the worrisome task of writing about the most exalted stars in the Bangla literary firmament gingerly and with some trepidation. What if my reverence was insufficient? What if I missed some important salient details? Was I even qualified to write about Bankim and Tagore at all? It scarcely occurred to me that I might run the risk of treating B and T with too much reverence. But no sooner had the column gone up than I received a string of tweets from a Bengali twitter friend suggesting politely that I look into assertions that it was not Bankim, but rather Peary Chand Mitra who wrote the first Bangla novel. Soon after, an old friend and learned Bangla scholar wrote a critique of my piece in an email (below), taking issue above all with my excessive reverence for the subject matter. This post then is dedicated to the lively spirit of debate, or adda, that stirs in the heart of all Bangla-philes. Feel free to spar, pile on, or sit by with pursed lips and folded hands in the comments below. 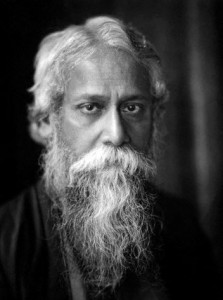 Otherwise my comment is that you were too reverent. You wouldn't write with such reverence on someone more contemporary, would you? This proves that they do not have contemporary relevance but are period pieces. Period pieces of perceived bong greatness. I am unsubtly telling you that Tagore was a crappy novelist--lit-crits don't want to admit that because they will lose their trade then. Bankim would be spared because he was a novelist though. As in, he was interested in the form.

Now, on to the women's question:
"...and women rarely know any existence outside the family compound. In such settings there is no room for pre-marital romance, and no chance of swashbuckling strangers striding onto the scene as they do in historical fictions like Durgeshnandini. Romantic tension must therefore materialize and play out entirely within the bounds of the home, the outside world penetrating only through the slats in the window shutters, and through novels, which bring with them a whiff of adventure and the possibilities of romantic love."

T 'n B or TB (?) wrote about a social milieu that also was the kachra of the Permanent Settlement (PS): the babus and bibis of Bengal. The majority--literally the millions--who were screwed as a result of the PS beyond any doubt stayed on as landed or landless peasants. And half of that population were women. These women too were indeed married off early but they had to work! And there were many instances of pre-marital sexual encounters (romance too maybe) among poor and working women, tribals, and women living in barren lands as well as forest lands. A good deal of ethno-lit (for what the term is worth) of the 20s and 30s when T was alive and had become the baba of culture bear evidence. Women also really worked in the fields and forests and did gazillion kinds of work and therefore the outside world didn't come to them through slats at all. On this very premise, it is high time to refuse to write on Tagore and Bankim--simple as that. Your next assignment should be Manik, if you want to hang out with the bhadralok with a difference.

In passing--20th century Bong novel form has truly little or nothing to do with Bankim. It is a lit-crit myth to presume so. My theory experiment is, what if there were no T & B? Would you still be able to lead a meaningful literary and social life? My unambiguous reply to that is, Yes! You would then truly get to know those who were made to live in the dark with TB raging inside and outside.

TB, as we all agree must be eradicated.

Finally, someone decides to write about the long forgotten. I've often thought someone needs to spread the word to let the current generation know of the greats that went before them. They are no PS3 or Manchester United, but still..

Its unfortunate that the wry Bengali wit of Humayun Ahmed isn't more readily available in English. Do you know of any translations?