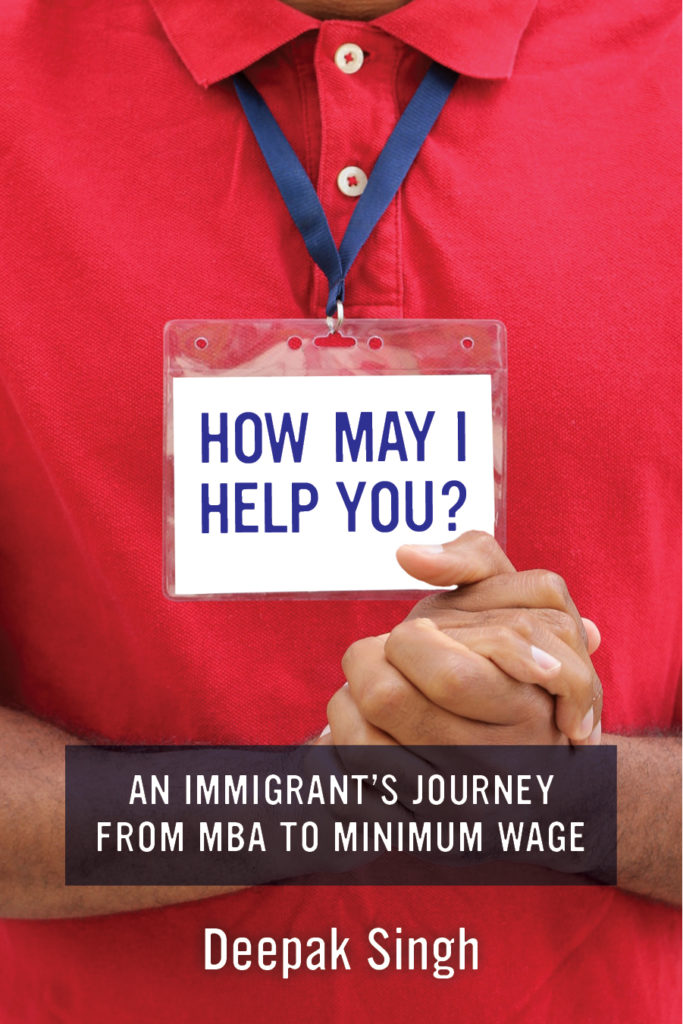 How May I Help You?

Deepak Singh (DS) is a writer, radio producer, and journalist. He is a frequent contributor to PRI's The World and has written for The New York Times, NPR, The Boston Globe and The Atlantic. His new book, How May I Help You? An Immigrant's Journey from MBA to Minimum Wage by UCPress in Feb 2017. We are happy to carry a conversation between Singh and long-time CM friend Aftab Ahmad. Aftab Ahmad (AA) earned his PhD in Urdu literature from Jawahar Lal Nehru University, specializing in Urdu humor and satire. He was the director of AIIS, Urdu Language Program at Lucknow, for four years. He published Bombay Stories (Random House India, 2012, and Vintage International, 2014) and Mirages of The Mind (Random House India, 2014, and A New Directions Book, 2015) with co-translator Matt Reeck. Recipient of PEN Translation Grant, he has taught at UC-Berkeley. He now teaches Urdu language and literature at Columbia University.

AA: For the benefit of those who have not read the book yet could you say briefly what is this book about and what in your own opinion have you achieved and accomplished through this book?

DS: This book is about my experiences as a 'fresh off the plane' immigrant in the United States of America, selling electronics in a retail store in a small town Virginia, where I learned about the struggles of my colleagues and I adapted to my job and my new life. There are a lot of qualified, educated Indians and immigrants in general, staffing the many motels, grocery stores, super markets in the United States. They came to the U.S. looking for a better life, but we often take for granted what they had to give up to be here, the sacrifices they made. We can't paint all immigrants by a single brush. By telling stories of low-wage employees, I have attempted to bring openness and humanity to debates about work, race, ethnicity and immigration in the United States.

AA: This goes back and forth about your experiences in the USA and India. Each compelling experience in USA brings some memories back to your mind from your life in India. While writing the book did you have to suppress certain experiences that you thought wouldn't go well with Indians - that would have brought a negative image of India? Did you feel the burden of not saying anything about India that could throw a negative light on it?

DS: Throughout the writing process I constantly asked myself if I was being true to myself in expressing my experiences and my feelings. Most days, I sat and cried at my desk before I typed the first word. I have tried my best to bare my heart in this book and I tried to live by the famous Robert Frost quote: “No tears in the writer, no tears in the reader.” I do hope that my honesty comes through for my reader.

AA: In India we only hear about Pakistan and people over there. We get immediately riled up just by the mention of Pakistan. Our patriotism is aroused. We just live with a certain image of Pakistan without any real experiences with people. Most people in India die even without ever seeing a Pakistani man or woman. In the USA, we get the opportunity to meet people from all parts of the world. Would you like to say something about your experiences with Pakistani people in the USA?

DS: This book has taken place almost entirely on the sales floor, where I did meet a few Pakistanis, but wasn't able to engage in a meaningful conversation. To answer your question, I'd say yes, I would've never met a person from Pakistan if I hadn't left India. I had a certain perception about Pakistanis before I arrived in the U.S. Laughing and joking with folks from Pakistan in the U.S., I'd often forget they were not from India. And, I'd often think, “They aren't all that different from me, are they?”

AA: Would you like to say something to your readers that you would have said if you wrote the book today, in the light of recent political developments in both India (including the new CM in UP and the rise in Hindu nationalism) and America?

DS: Growing up a high caste Hindu in Lucknow, India, I wasn't aware of the privilege it afforded me. Although, most of my friends were Muslims, I didn't know what it was like to be a minority, or to not be a Hindu in a Hindu majority nation. No one questioned my patriotism for India, or treated me as if I didn't belong to the country, or asked me to leave India if I didn't like it. I joked and criticized its government without worrying that someone might think of me as an antinationalist. Coming to the United States, I became a part of the minority. It took me a while, but I learned what it feels like to belong to the lower strata of the societyâ€”a society that is underprivileged, disadvantaged. The book took 6 years to write. I wasn't writing every single day of the last six years and the most of the revision happened in the last year. I don't know what I would say if I was writing the book today, but I do want to say that my heart grieves to know what's going on with minoritiesâ€”be it India, Pakistan, or the United States.

AA: What fundamental differences do you see in the thinking and attitudes of people in India and the United States in general? I'm thinking about differences that reflect deeper cultural orientations to the world. Your analogy of Black Friday and Kumbh Fair in India brings this question to mind. A vast majority of people in India live on pathetic wages. They seem to be barely scraping by and many times living by gathering debt. Yet they appear to be happy. Are they really happy?

DS: I left India about 13 years ago and since then the country has changed drastically. Smart phones and social media platforms like Facebook, Twitter, Instagram didn't exist then. Home phones were a luxury and cellphones had just been introduced in early 2000s. No one knew the word 'selfie. Working in retail in America, I noticed that Americans didn't hesitate to buy something on credit. They actually seemed thrilled if they were able to purchase something on credit and often times people planned to spend their paycheck that they were expecting in two weeks' time. I noticed they indulged in shopping to forget about their sadness, depression. I think it is hard to be poor in a rich country. There's a stigma attached to being poor in America. You're considered to be a slacker, someone who is lazy. Where as in India, poverty is everywhere. You can't spend a single day without witnessing a hungry child on a street. I don't know what I am trying to say here, but the point is that people in India seem to have other thingsâ€”their familyâ€”to hold on to when they are down and out, where as in the U.S. you're on your own after a certain age.