At Madison, I attended a panel "Medicene, Science, Sex" as part of the series of panels celebrating the careers of Prof Geraldine Forbes and Prof Barbara Ramusack. In audience were some of the greats of South Asian history and Gender studies - including Prof Veena Oldenburg. One of the papers on the panel dealt with the history of mass sterilization movement in India and its global health partnerships. After the discussion that followed, Prof. Oldenburg narrated a story to me, from her own fieldwork in Lucknow, UP. It was such a fantastic story, that I begged her to write it up for the CM audience. It is a story that shows not only that "agency" we academics are forever harkening about, but that "humor" we sorely need. I am very grateful that she has written it out. Enjoy. - sepoy 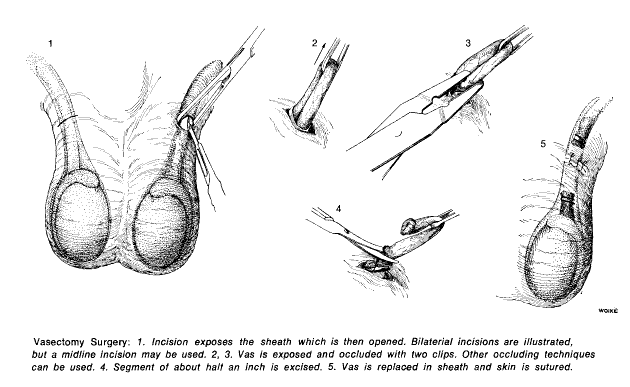 In Ernakulam District of Kerala State, India, a massive vasectomy camp was conducted at Cochin, the capital city of the district, from 20 November to 20 December 1970. This camp was organized under the leadership of the district collector and the District Family Planning Bureau with the assistance of other departmets of government, the local civic leadership, and voluntary agencies throughout the district. At this camp 15,005 vasectomies were performed, setting an all-India record. Encouraged by the success of the first camp, the collector and the family planning bureau organized a second one-month long sterilization camp in July 1971 in the same city. At this camp, or "Family Planning Festival" 62,913 vasectomies and 505 tubectomies were performed, exceeding by more than four times the all-India sterilization record set by the same district only seven months earlier. These massive sterilization camps have been hailed as a tremendous breakthrough in India's family planning effort.
Mr. Kristnakumar, I.A.S., is the district collector of Ernakulam District, Kerala State.
- S. Krishnakumar. "Kerala's Pioneering Experiment in Massive Vasectomy Camps," Studies in Family Planning , Vol. 3, No. 8 (Aug., 1972), pp. 177-185

In Gujarat State, India, 221,933 vasectomies were performed during on eight week campaign. More than 1,000 vasectomy camps were held throughout the state. The decentralized approach had several advantages over the single camp approach: a wide coverage in terms of area and population was achieved; follow-up of acceptors was facilitated; and savings in expenditures on transportation were realized. Finally, the existence of multiple camps avoided the overcrowding and the heavy workload for doctors that could occur at a single camp.
Dr. Thakor, M.B.B.S., D.P.H., is the director of Health Services and Mr. Patel, M.S.W., M.P.H., is mass education media officer of the Family Planning Project, both in Gujarat State.
- V. H. Thakor and Vinod M. Patel, "The Gujarat State Massive Vasectomy Campaign," Studies in Family Planning , Vol. 3, No. 8 (Aug., 1972), pp. 186-192 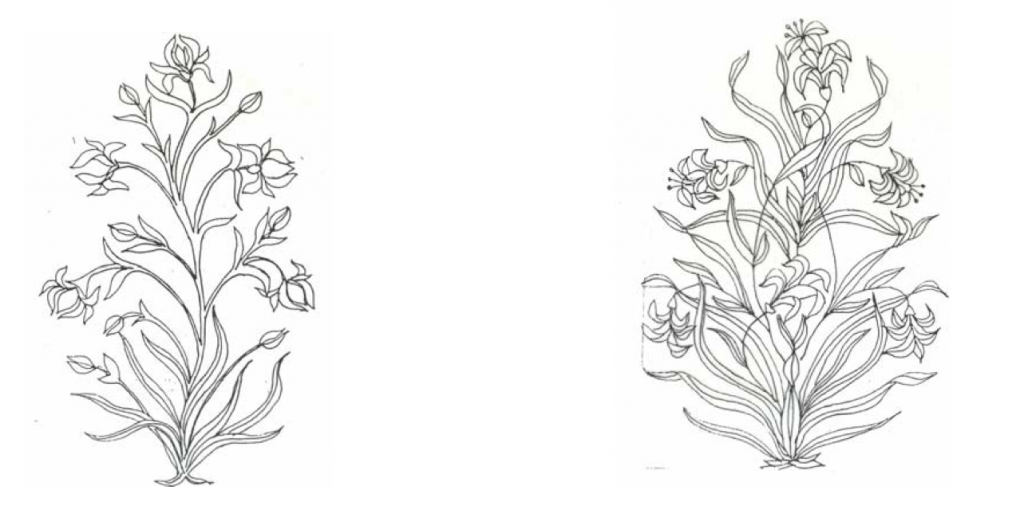 On a cool afternoon in January, 1976, in an alley not far from the Chowk Police Station in Lucknow, I arrived at the frequently visited home of Mirza Sahib, a putative great-grandson of Awadh's last king, Nawab Wajid Ali Shah. It was more like a two room tenement with an open space in the back where food was cooked and clothes were dried on a string. A shallow drain ran along the very narrow brick lane and behind the steps that led to the front door. My knock brought the middle-aged nawab to the door and he hastily ushered me in and shut the door. He nervously explained, looking over his shoulder in his compact sitting room, that he had an urgent task to perform. It was not a good time to talk about olden days when the present world had been turned upside down with “Sanjay Gandhi's Emergency raj”, and that a big van with the nasbandhi (vasectomy) doctor was expected in a couple of hours in this locality.

He was referring to the coercive birth control policy of the ruling Congress Party under the Emergency declared by Indira Gandhi that had generated widespread resentment and fear in the country. He had been chosen by his community (Shia residents of Yahiya Gunj) to explain the perils of nasbandhi to them and he was in the middle of practicing his speech that he was to deliver in a few minutes. I nodded and made to leave but was stopped by an urgent banging on the door. He asked me to retreat to the back verandah where his wife, Begum Sahiba, was sitting with other women relatives, but I was too curious to see what was happening to proceed as asked. He opened the door to find his audience had completely filled the alley and he had to begin his talk immediately.

He put on his cap, held his right hand to his heart and made a polite bow to greet the crowd. Then he cleared his throat and asked his wife to 'bring the water'. Begum Sahiba, delicately maneuvering behind the curtains, came into the room with a galvanized iron bucket, full of water. Mirza Sahib began rather diffidently: Logon, bhaiyon, aaj hum bahut khatre meing hain. People, Brothers we are in great danger today. Nasbandhi hamari mardani takat ko khatam kar degi, hamari aagey ki naslein paida hee nahin hongi, aur hamare jism mein gandagi aur bimaari phelaa degi. A vasectomy can destroy our manhood, wipe out our future generations, and disease our innards. Aap kisi bhi halat mein nasbandhi na karvain, chahe gorment aap ko paise de ya transistor radio de ya aapko naukri de. Under no condition must you agree to have a vasectomy even if the government tempts you with money or transistor radios or even jobs.”

Here he made a pregnant pause and picked up a brick that was lying in a corner of the room and placed it on its side to block the drain outside. He resumed: Aap iss eenth (brick) ko dekh rahe hain? Can you see this brick? On cue Begum Sahiba spilled the water from the bucket into the drain. The blockage made the water overflow and cover the street. 'Yeh nasbandhi ki karvai hai,' he said triumphantly. 'Dekhiye jaise naali ka gand phail raha hai, aise hee bahar jaane wala gand aap ke jism mein phel jaye ga. This is what a vasectomy does; your own polluting emissions will collect inside and cause you to sicken.” He was now declaiming with considerable conviction; his explanations getting farther and farther from reality, describing how their male genitalia would wither and fall off and they would be eunuchs. The crowd made horrified noises and said that this was against God and religion but they were afraid of what the Government might do to enforce this policy. They cried death to the Congress Party and its leaders: Sanjay Gandhi murdabad! Indra Gandhi murdabad! Congress party murdabad!

Begum Sahiba was now back among the women, revealing to them about the horrors that would visit their men folk and make them sterile. A silence, induced by paan gilories in their mouths, felt tense. 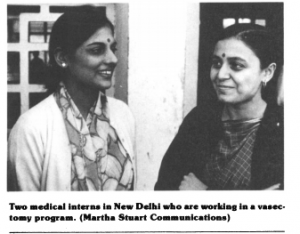 The lusty sloganeering died down; a messenger brought the news that the van was only 4 kilometers away. Just when gloom and doom had taken hold of this crowd, an older man, an artisan of the chikaan embroidery industry, a Lucknow specialty, raised his voice. He said he had a remedy to help them all escape this fate, to escape the police who would arrest them for refusing to have vasectomies. His gnarled and bony hand withdrew a pouch from his kurta pocket and he held it aloft. For a mere five rupees each he could save them all. The interest in this remedy was instantaneous and five rupee notes came out of inside pockets in a hurry. The man opened his pouch and showed what this magic bullet might be. He had small neatly embroidered parchment vasectomy scars (nasbandhi ke taankey) that he would artfully place on a testicle of each man there. This would last at least a week with the kind of adhesive he would use. This is what they would have to show the paramedic and claim that they had already been sterilized. This would save the day, their tomorrows and their future generations. God is great.

My follow up research proved to me that this trick worked. I marveled at the artistry of the ruse. A year later the Emergency was lifted and a general election was called. The Congress Party did not return a single candidate as a member of parliament to the 85 seats from Uttar Pradesh, their former stronghold.

[…] We published a greater number of guest posts this year, bringing to our readers glimpses of JLF, Kurdistan, and Kabul; a review of Vollman's memoir; a comment on “the politics of 'Razakar memory' in Andhra Pradesh”; a reflection on the “everyday political in Paromita Vohra's documentary films”; and AJK's Shura City. Of all these many excellent guest posts, Prof. Veena Oldenburg's contribution was truly a cut above. […]

[…] Veena Talwar Oldenberg, author of one of my bibles of research for my work in progress, narrates this entertaining story relating to mass sterilization efforts in India in the 70s. (Men might want to skip the minimally graphic yet still squirm-inducing drawing of a vasectomy at […]

The Obvious Relationship Between Climate and Family Planningâ€”and Why We Don’t Talk About It | Away Point | September 26, 2014

[…] as is India's early attempt to set and meet population targets with enticements including transistor radios and cash incentives and, when those failed, deceit. Less known is the fact that in the 1990's […]