Gentle readers, a state of perpetual bizzzie-ness is about to descend on me. (( Though there is much I want to say on the Germany win, the absolutely heart-breaking Ghana loss, that "discussion" on temples/history going-on in that previous post, the first five chapters of Seven Pillars of Wisdom, the ridiculously amazing The City in History by Lewis Mumford, the American Tourist who sat next to me on GAT-SXF yesterday, the soul-crushing amount of writing I have to do between July 12-22nd, various and sundries. I won't say anything about the Daata Darbar bombing in Lahore because I cannot trust that either my words or my sentiments are for public consumption.))

I will, however, post - on twitter or here - thoughts, words, links, expressions relating to a project that I am lucky enough to start with some excellent people. Details and participants are available here and, below the fold, some description and the working bibliography of projects which we are hoping to build upon. 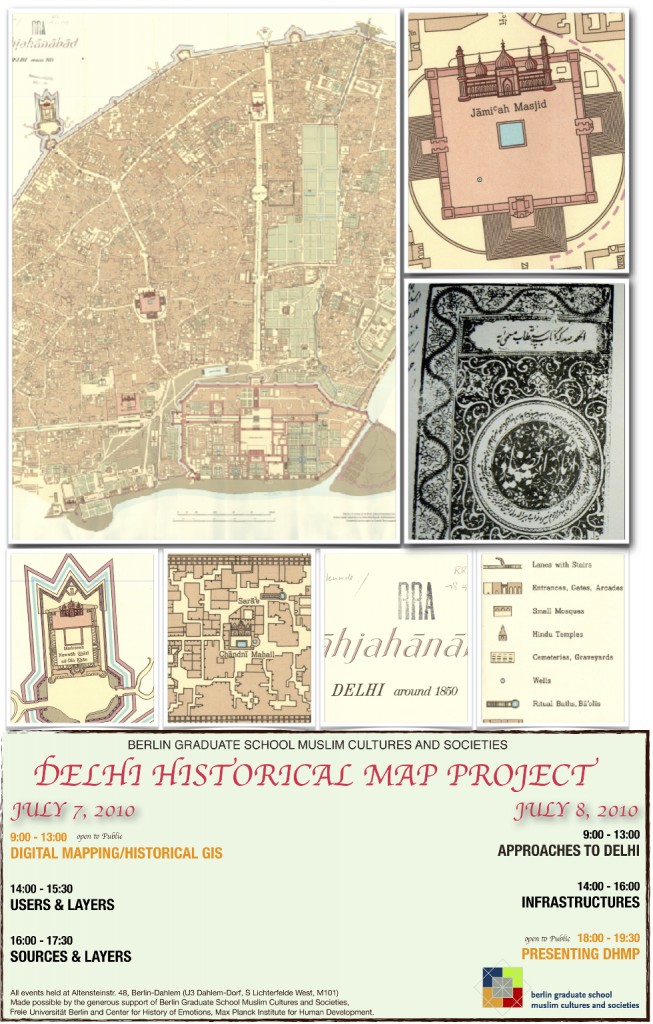 The aim of Delhi Historical Map Project (DHMP) is to visualize the spatial geography narrated in a series of Persian and Urdu accounts of “Old Delhi” (established as Shahjahanabad in 1639) from the 19th century onto a contemporary (1850) map of Old Delhi.

In Shahjahanabad/Old Delhi: Tradition and Colonial Change (1993), Ekart Ehlers and Thomas Krafft reconstituted an 1850 hand-drawn and hand- colored map of Delhi of an unusual scale and detail - it was 100 by 100 cm and contained in-depth notation of key buildings, monuments and neighborhoods. This hand-drawn map was painstakingly reproduced by Gerd Storbeck. As such, this map represents a crucial cartographical source for the scholars and researchers. Our goal is to use this map as a basis of visualizing 200 years of cultural and social history of Delhi - by incorporating information contained within historical texts, illustrations and photographs onto the space demarcated within the map.

Our first step is to scan, geo-reference (add real-world co-ordinates), project, add attributes (name places), and add meta-data for the 1850 map so as to align it with present-day geographies and prepare it for research usage by scholars.

Our first layer of historical date will consist of two key texts - Mirza Sangin Baig's Persian Sair al-Manazil (Tour of the Mansions), written in 1819/20 and Syed Ahmed Khan's Urdu Asar al-Sanadid (Remnant Signs of Notables), first published in 1847. Both of these texts provide a street-level detail of notable buildings, streets, neighborhoods, along with biographies of prominent residents. Both are also accompanied with over a hundred sketches. We will encode the locations, descriptions, social spaces onto the map and thereby depict not only the spatiality within the texts, but key patterns of habitat, movement, growth and decline. We will digitize and incorporate the Persian and Urdu text as layers embedded within the text.

DHMP intends to take the tools and features of Historical GIS (Geographical Information System) and provide them to scholars interested in visualizing cultural or social history of Delhi. The uniqueness of the 1850 maps is that it presents a rather stable picture of pre-1857 Delhi - so much so that we envision texts as early as 17th century being easily incorporated onto the map. It is this component, which we hope to develop, that will allow scholars to look at Delhi (or sections thereof) along a temporal axis.

What fabulous historic sources to have. Good luck.

hooray! so excited to see this flowering at last. next year (for) in istanbul?

this is great! is there a way to follow this project?

why not old Lahore, yo?

Wow, this seems like a stunning project! Way to go!

Hi, I'm an anthro/performance studies student working on alternate spatial histories of (contemporary/post-Partition) Delhi as mapped by walking. This project -- a few years old, I realize -- sounds completely fascinating. Is there a copy of it online somewhere? The link no longer works, and I'd love to have a look at your final product, if it's open to access.

Sorry for the delay in responding to this. The project is still on-going and I can keep you in the loop going forward.