Vedita Cowaloosur on her love-affair with A Suitable Boy. Mira Nair’s adaptation of the Vikram Seth novel appears on Netflix US on October 23, 2020. 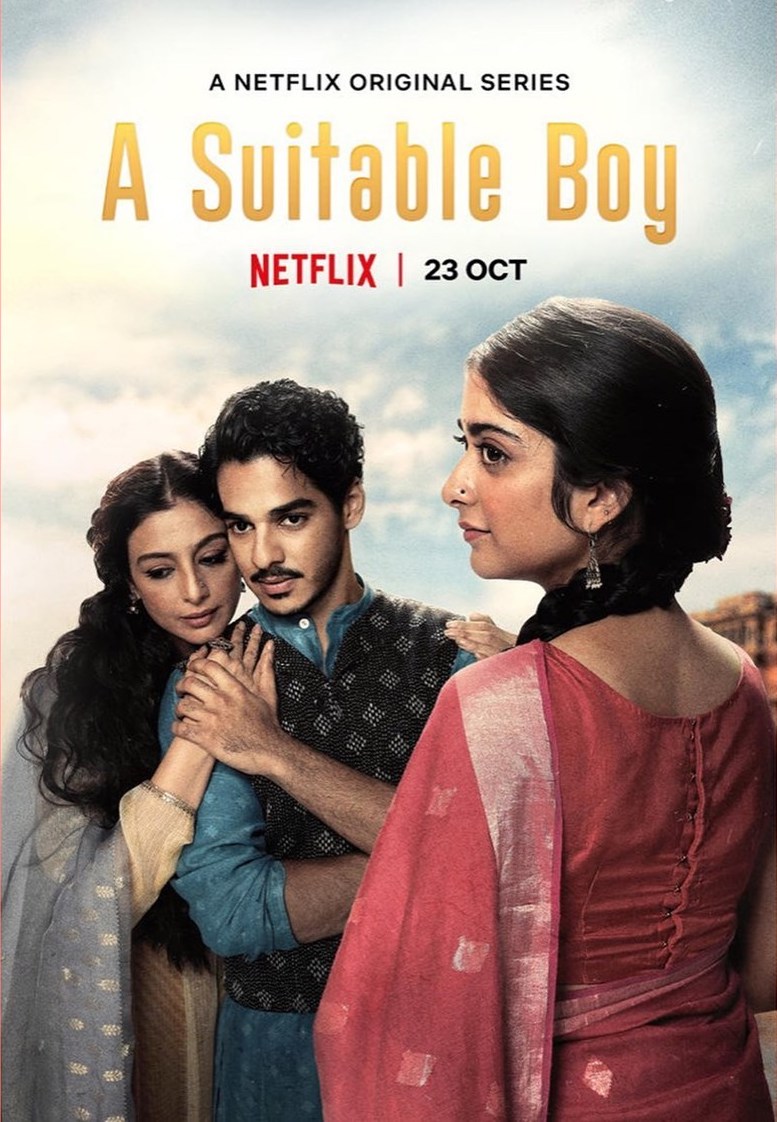 This, said in a tone of half-rebuke and half-indulgence, was my wise and trusted PhD supervisor–in response to my complaint that I was unable to write as passionately and eloquently about Salman Rushdie’s novel, because I was “not nearly as much in love with Midnight’s Children” as I was with the other novel that I was writing about then. That other novel was Vikram Seth’s A Suitable Boy.

“But it helps, to be in love?” I insisted, almost imploring him to agree. “Love blinds you to the faults of that which you love.”

He was right, of course. But in love with this novel I was!

It was a love story that began when I was nine years old. Born in Mauritius, I was on a family holiday to India in 1994. Bookshops, as always, had formed an essential part of our trip. In every bookshop we visited, I saw my father linger over a particular book, debating whether to buy it or not. It was a particularly hefty-looking novel in hardcover, with a maroon dust cover and gold lettering. It had extremely thin pages, almost like tracing paper, with tiny print. I lifted one of the copies in a Connaught Place bookshop and observed the patterns on the cover that looked like the embroidery on the borders of my mother’s zardozi sarees. “Pretty,” I thought — and then promptly moved on.

“Why aren’t you getting it?” I remember asking my father, after we had left yet another bookshop without buying the book that had obviously captivated him.

“It’s too heavy to carry around on a holiday. Over a thousand pages!”

Incidentally, this was not an argument that I would hear for the last time. Many years later, my friend Ethan would tell me about his sister’s adventures with A Suitable Boy while trekking around Cambodia. As her travel and reading progressed, she would tear out chapters of the paperback book, and pass it on to other avid readers at the camps and hostels that she stayed in. She flew back to England with less than a hundred pages and the back cover only, specifically saved for reading on the flight home.

At the very end of our India holiday, Papa finally purchased the book–though that was yet another adventure. Like all good desi families, we had checked in our luggage and cleared passport control several hours before our flight was due to take off. There wasn’t much to do in Delhi Airport at 7am. We walked up to the bookshop again, but Papa’s beloved book was not on the shelves.

“Do you have a copy of Vikram Seth’s A Suitable Boy?” Papa asked the cashier.

“It is out of stock in our shop, Sir. You might be able to get a copy in our other shop. But that other shop is located in the area before Customs clearance.

Papa’s disappointment was visible. He was going to have to go back to Mauritius without the book that he had coveted throughout his trip. This was 1994. Ordering it online was not an option, and Mauritian bookshops would probably not stock the book for another few months, at least. A smiley-faced janitor who was working in the bookshop overheard our conversation. She approached my father.

“I can get it for you. My shift is almost over. Write down the title on a piece of paper and give it to me.”

And this is how A Suitable Boy came into my life. I sat next to Papa on the flight, and read random sentences over his shoulder, while he devoured the first few chapters on the 6-hour journey home: “Buy me before good sense insists, You’ll strain your purse and sprain your wrists.” (Papa laughed out aloud at the epigraph. I joined in too.) “You too will marry a boy I choose.” “A heart was shattered into bits — and one fell here, and one fell there.”

I tried to read A Suitable Boy at several intervals over the following years, but never made it far enough. It is only in the summer of the year when I turned fourteen that I finally managed to come to grips with it. The trigger was a meeting with Vikram Seth himself.

He was in Mauritius for a literary festival, and my father took my sister and I to the event. Seth’s sense of humor and eloquence impressed us all, and afterwards, we ran after him to request him to sign our books. He was kind towards these two star-struck teenagers. Patting my sister’s head, he said: “My little sister is called Aradhna too.” In that moment, I wanted nothing more than to be Aradhna.

I read A Suitable Boy over several months, going slowly over some chapters and pausing frequently to ask questions to anybody who would be willing to enlighten me.

What is Partition? What is a courtesan? Can you tell me the story of the Indian independence movement? Was Nehru a good man? I don’t understand all these passages about Zamindari abolition and land reforms, can you explain them to me? What’s khatri? Jatav? What does “secular” mean? What is the purpose of a Language Bill? What does a Socialist Party Student Union do? And then: How do I start one in my school?

Other chapters, I rushed through, craving more. The descriptions of Brahmpur, Calcutta, Lucknow. The beautiful ghazals sung by Saeeda Bai. The witty repartees at the Chatterji table. The love scenes between Lata and Kabir. Some–such as the lengthy description of cricket matches, the math consultations between Bhaskar and the eccentric Professor Durrani, and the long passages recounting academic department meetings and negotiations about the inclusion of James Joyce on an undergraduate syllabus–I skipped entirely. But above all, there were entire chapters that I read and re-read, often discussing them with Papa and realizing that I actually missed out on essential context to understand it properly.

By the time Lata tossed out the mussami to a monkey from a moving train on page 1349–never to find out whether the gift actually reaches the intended recipient–the tightening of my chest, lump in my throat and hot tears streaming down my cheeks make me realize one thing: I was in love.

I was in love with the writing, the characters, and the fictional Brahmpur setting. I was in love with the writer’s ability to involve me so fully in a world that I barely knew. I knew that the book would form an elemental part of my life from that moment onwards–and it did. As I grew up and read more critically and with better understanding of the context, my admiration for A Suitable Boy only increased. Seth’s vision of post-independence India in his novel acts as a manifesto for an India that is secular, inclusive, and accepting of differences. It is critical of the politics of communalism, whether riding on ethnicity, religion or language. His biggest censure is reserved for the proponents of nationalist and fundamentalist politics–including non-fictional characters such as P. D. Tandon, and his fictional allies, such as L. N. Agarwal, who are the flag-bearers of Hindutva in the novel, with their triple endorsement of language and religion with nation: Hindi, Hindu, Hindustan.

On the other hand, the novel’s more sympathetic characters valued relations that transcended sectarian lines. There was the friendship between Mahesh Kapoor (a fictional Congress Minister) and the feudal landlord, the Nawab of Baitar. Their friendship even overrode Kapoor’s authorship of the Zamindari Abolition Act–a legal measure to oust the landholding system that would give long-term tenants some measure of security against the will of often exploitative landlords–and whose successful implementation would end up disadvantaging landowners like the Nawab himself. Then there is Mahesh Kapoor’s son, Maan’s friendship with Feroze, the Nawab’s son, their sexual relationship coming in for a brief mention. Kabir, who Lata fell in love with, is Muslim, presented as largely more interested in cricket than religion.

Writing about the book in 2007, Neelam Srivastava called the novel, published in 1993, “a specific response to India’s present needs.” And it is a testimony to the novel’s greatness that A Suitable Boy remains not just a commentary on 1950s 1990s, or 2000s India, but also the India of 2020.

The Indian state’s attempt to instill fear and hatred of minorities has been ramped up again in recent years. The current Indian administration has blamed Nehru for everything from the ongoing and unresolved Kashmir issue, to Partition and ensuing strife with Pakistan, to border discord with China, to the disputed Uniform Civil Code, to Indian Foreign Policy lacunae. Though he was by no means faultless, much of this blame has been to demonize Nehru’s rational, liberal and secular vision, which pitted him against other nationalists, including within his own party in his time.

The world release of Mira Nair’s adaptation of A Suitable Boy on Netflix, on the 23rd of October, therefore comes at an opportune time. Already, it is being touted as this year’s most formidable period drama, with thousands around the world expected to tune in to acquaint themselves with the nostalgia of 1950s India. But as India, and the Indian diaspora, grapples with the rise in ethno-nationalism and fundamentalism, it is perhaps also helpful to look back to this novel and the series as a reminder for the solace to be found in tolerance, acceptance and understanding beyond communal and political lines. That, for me, is why A Suitable Boy is a love letter to the world.

Vedita Cowaloosur cannot stay in one place for too long. She is currently based in the San Francisco Bay Area, where works as a language coach, while she continues to write, and translate between the following languages: English, French, Hindi, Urdu, Bhojpuri and Mauritian Creole.