[The 9th Annual Pakistan Conference was organized by the Center for South Asian Studies at the University of Michigan. You can find the conference schedule and speaker bios on the conference website. We are grateful to Sara Tahir for writing this report for us.]

The University of Michigan’s 9th Annual Pakistan Conference was held on 30th March, 2019. The theme of the day-long conference was “Spaces of Capital,” around which were organized two panel sessions, a public art presentation, and a documentary screening. The conference participants reflected the international spread of scholarship on Pakistan, bringing together scholars from Pakistan, Europe, and the United States. 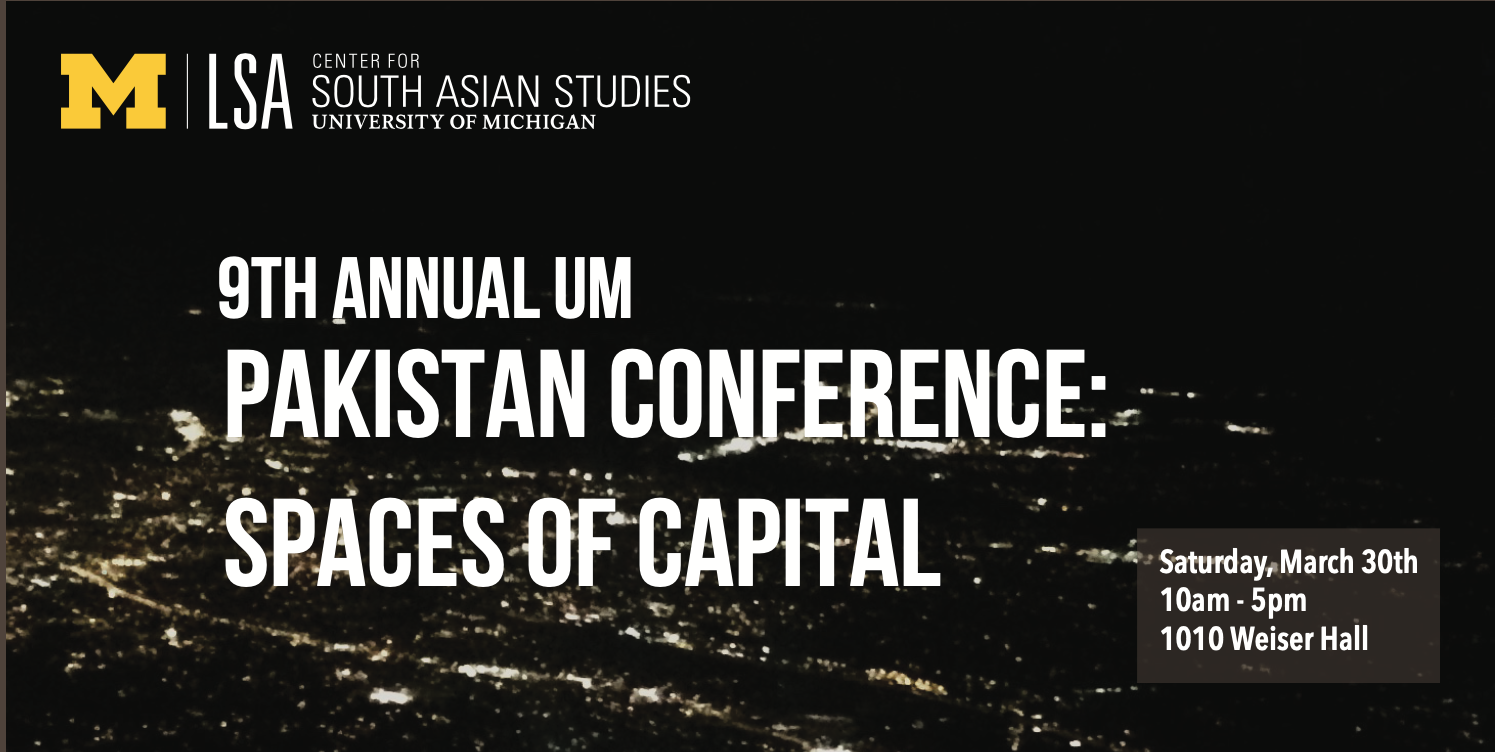 Papers by Amen Jaffer (Lahore University of Management Sciences) and Maira Hayat (Stanford University) made up the first panel, titled “Capital Flows.” Jaffer presented on Lahore’s waste economy, calling for an understanding of its social and cultural logics alongside its economic logic. Inspired by anthropologist Mary Douglas’s conceptualization of waste as an effect of classification and categorization, Jaffer explicated the process of waste collection in Lahore by looking at the value of waste not just in terms of the objects that constitute it, but in terms of how individuals involved in waste collection extract value from it. The waste collectors in Lahore are predominantly part of the nomadic khanabadosh community. They work alongside seasonal Afghan migrants who have their own waste collection circuits. In his ethnographic investigations, Jaffer found that waste collectors referred to their work of collecting and recycling waste in terms of movement (phirna). The same terminology was also used to describe their social life apart from their occupation, illustrating how working waste enabled these communities to sustain themselves socially.

Maira Hayat’s paper spoke to the politics of water stewardship and what that entails for the adjudication of public values in Pakistan. Nestle Pure Life holds the largest share in Pakistan’s water market. Hayat found that Nestle lays claim to water stewardship through its Corporate Social Responsibility campaign in Pakistan, rather than through its business model. Nestle’s framing of water stewardship as taking care of something that is not owned by them is reflected in the public discourse in Pakistan on trusting Nestle precisely because it is foreign. With the advent of “Naya Pakistan,” focused on a politics of repair in the bloody post-9/11 era, the spotlight shifted from Nestle to the influence of the Supreme Court in Pakistan’s politics of water stewardship. The Supreme Court established a dam fund in 2018 and campaigned for public donations by framing the right to water as a fundamental human right, and thereby its provision as a duty of the government. While looking at how corporations and the government shape public values, Hayat questioned whether contouring the public was enough. She called for paying attention to how and what the public evaluates as well.

The second panel was titled “The Social Life of Capital,” and it included papers by Nicholas Martin (University of Zurich) and Muhammad Ali Jan (University of Oxford). Martin highlighted the absence of a political idiom of caste in Pakistani Punjab when compared to Indian Punjab. Drawing upon Ambedkar’s insights on the intersections between caste, class, and religion, Martin attributed this absence to the emergence of a monolithic Islamic identity in Pakistan. However, even in Indian Punjab where untouchability was outlawed and which saw the emergence of a politically-active middle class with access to the state, the effects of the politicization of caste are ambivalent. This is supported by the evidence that Dalits in India still predominantly work in agriculture, brick kilns, and construction. Furthermore, in cases where outcomes in India were different from those in Pakistan, it might have had more to do with other factors such as the development of democratic systems and changes in economic conditions. Considering this ineffectiveness of the politicization of caste, Nicholas advocated for the need of class-based coalitions.

Muhammad Ali Jan’s paper sought to conceptualize the development of the capitalist class in Pakistani Punjab as a class in its own making, rather than from an abstract, Eurocentric understanding of the emergence and development of capitalism. He took the region as an appropriate unit of analysis to examine the historical development of the scale and organizational forms of capitalism in Pakistan. He found that while caste and kinship are important constraints on certain groups, in the districts of Pakistani Punjab that he studied, capital has emerged through accumulating strategies of particular families across the class divide. This has resulted in the emergence of diversified family capitalists that straddle the rural-urban and agro-industrial divide, having their origins in different social groups (landlords, peasants, lower castes). Thus, while caste and kinship might be significant initial conditions, they are not all-encompassing factors in the formation of a capitalist class, particularly after Partition. Through his study, Muhammad Ali Jan reminded us that rather than connecting the local and global directly, or thinking of them as derivations of each other, we need to look at the actors involved in this global-local interaction.

In the next session, Saima Zaidi from Habib University gave a presentation on art installations set up in the walled city of Lahore by the not-for-profit organization called Numaish-Karachi. The exhibit was geared towards the creation of inclusive urban retreats within Old Lahore. The exhibit was aptly titled Sheherezade, signifying the ethos of the project to highlight the different contours of urban Lahore via innovative art. Playing at the intersections of design, culture, science and technology, Zaidi argued that the art installations were influenced by, and in turn shaped, the public life of the city.

This presentation was followed by the screening of the documentary Perween Rahman: The Rebel Optimist, directed by Mahera Omer. The documentary was based on the life of activist Perween Rahman who strove to change Karachi’s derelict urban landscape for the betterment of the socially marginalized. Through conversations with her friends, family, and colleagues, the documentary enabled the audience to experience Rahman’s inspiring personality and untiring ambition to bring about social change.

The conference concluded with an impromptu commentary and Q/A session with all participants. In response to an audience question on what was currently popular in Pakistan’s knowledge academy, the participants identified gender and sexuality, urban studies, social development and policy, and a surge in journalistic village ethnographies as the current and upcoming trends in Pakistani academic discourse. The conference concluded with everyone reflecting on the conference theme, and how the presentations illustrated the distinctiveness and heterogeneity of Pakistan’s “Spaces of Capital.” Instead of being located in factories, spaces of capital seemed to be found in resources, caste politics, familial trajectories, state politics, public art, and urban activism.

–Sara Tahir is a Phd student in Anthropology at Michigan State University. Her research interests lie at the intersection of diaspora, transnational migration, and urban South Asia, and she is currently in the process of crafting her dissertation project.