With this post, we welcome Tapsi Mathur, qainchi, to CM. Mathur is a recent PhD from University of Michigan, and currently enjoying a postdoc as the Global Perspectives on Society Teaching Fellow at NYU Shanghai. Thank you for your volunteer work, and welcome to CM!-- sepoy. 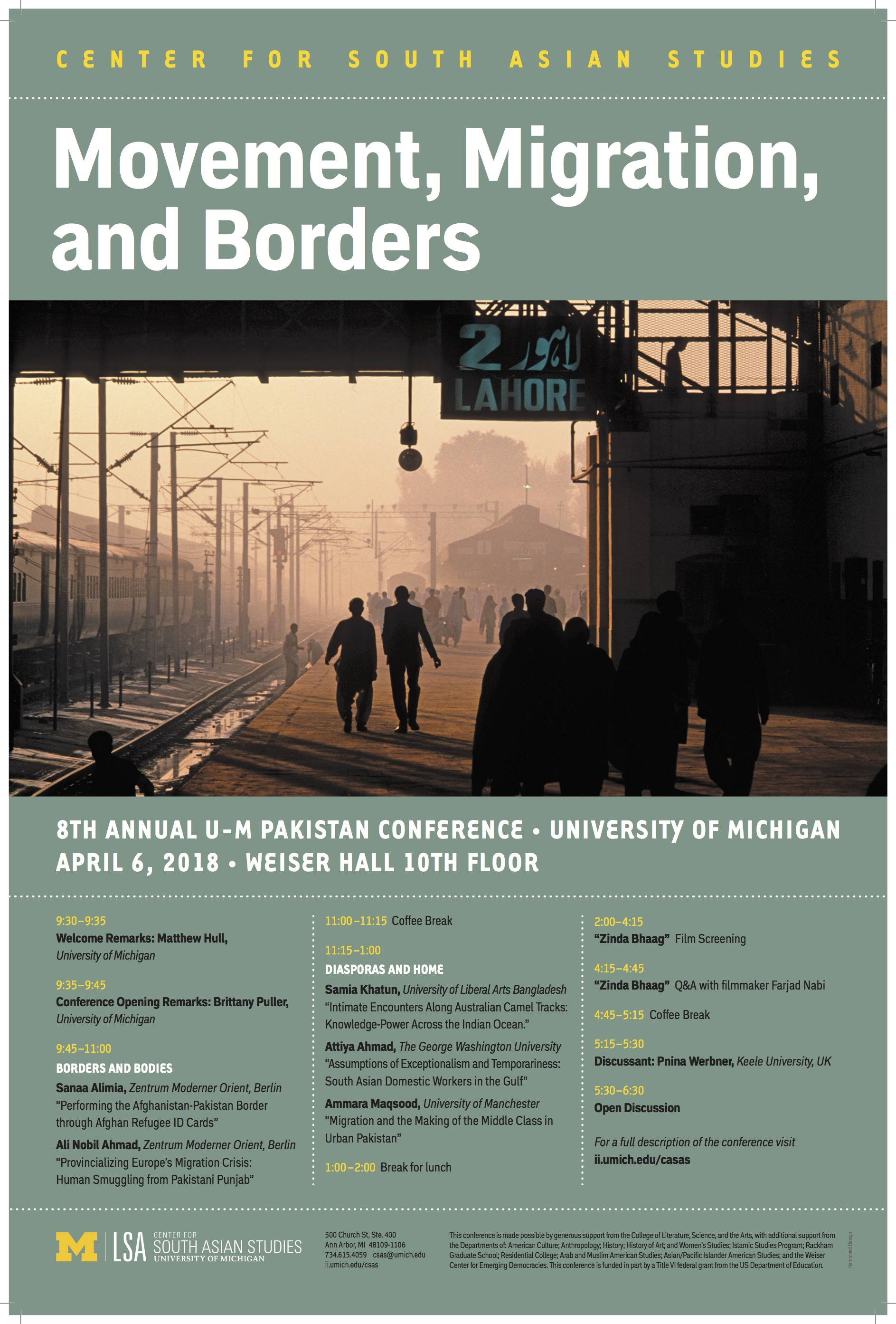 [The 8th Annual Pakistan Conference was organized by the Center for South Asian Studies at the University of Michigan. You can find the conference schedule and speaker bios on the conference website.]

The theme of University of Michigan's Annual Pakistan Conference, held on April 6, 2018, was “Movement, Migration, and Borders.” Conference convener Matthew Hull reminded us in his opening remarks of the focus of this conference, now in its eighth year, on fostering a political and academic discourse on Pakistan that moves beyond the paradigm of security studies. Conference organizers Salman Adil Hussain and Brittany Puller put together a lineup that examined the mobile realities of Pakistan and its people, covering the histories and trajectories of Pakistani diasporas in Aboriginal Australia, the Arabian Gulf, and Europe.

Several of the presenters interrogated the capaciousness of the lens of transnational for theorizing migration and displacement. Ali Nobil Ahmad, in a paper examining human smuggling from Pakistani Punjab to Europe, placed his work in conversation with theories of migration and environmental history. He spoke of that aspect of travel and migration seldom talked of - regret - contrasting it to transnational literature, structured as it is around the myth of arrival, where travel is largely optimistic. Attiya Ahmad's paper examined the gendered nature of the transnational work sector, taking as her subject South Asian migrant domestic workers and how they are produced as a "temporary population" in Kuwait. In this, she also added a temporal dimension to the spatial sense in which transnational is invoked in the literature on displacement and migration between the Gulf and South Asia.

The question of mobility and how it shapes both home and borders shifted the conversation back to the particularity of Pakistani state and society within the transnational. The screening of the film Zinda Bhaag (2013) zoomed into the category of the neighborhood. Shot on location in the house of one of the three young men featured in the film, each of whom was searching for a way out to the West, the neighborhood of Samanabad in Lahore is the site from which they plot their escape. Farjad Nabi talked the audience through, amongst other things (see the Q&A below), the aesthetics of the film that he co-directed along with Meenu Gaur. He pointed to the bright colors of the working-class neighborhood of Samanabad, contrasted with the fawn and beige-toned elite neighborhoods separated out from it, all making up the shades of Lahore they were trying to capture. Ammara Maqsood's paper stepped from the neighborhood in to the home, talking of the ways in which migration has shaped a middle-class population in Pakistan. Covering both migration in the 1980s and 90s to the United States as well as more recent migration to the Gulf, she elaborated on new ideas for religious learning and changing joint family structures and domestic life at home enabled by this movement. Sanaa Alimia took the conversation to the border and technologies of exclusion, in her study of Afghan refugees negotiating the Afghanistan-Pakistan border through the material means of the ID card. She showed how that border, celebrated by both the colonial and post-colonial state as historically fluid, was performed in to being since the 2000s, under the “Global War of Terror.”

Samia Khatun's paper relocated us temporally and spatially outside of nation-state boundedness with an account of two South Asian camel drivers in the Australian deserts at the end of the nineteenth century. Through a reading of their encounter with two Aboriginal sisters while waiting for a train, as told in an Arabunna-language story still in circulation, she put together Aboriginal histories with South Asian historiography to revisit debates on knowledge-power in the age of empire. This paper, and the surrounding discussion, brought to a close with comments by Pnina Werbner, expanded the discussion of Pakistan's many diasporas from merely North America. What emerged over the course of the day, as Werbner brought out, was a critique of optimistic narratives of migration and origins. This was often characterized by a bleakness, and yet also cognizant of the many affective, erotic, and irrational dimensions of movement and mobility.

Audience Q: What was the reception of the film in the neighborhood this film was shot in?

FN: Samanabad is the neighborhood in Lahore where this was shot. The reaction to the film was so overwhelming that some of the actors tried entering films after acting in this! People also started talking about their family members who left and never came back. This film provided a trigger to unleash those memories and stories - memories that were perhaps buried in the unconscious because even families don't talk about this.

Audience Q: Can you tell us more about how you developed the dialogue and banter in the film?

FN: We had a workshop with Naseer [Naseeruddin Shah], and he was an amazingly generous teacher. A lot of the banter emerged from it. The humor of Lahore and Delhi was very well represented. If you are drinking on the roof and your father comes on to the scene - the bantering of macho men stops and they are reduced to mice! They will also switch to very polite Urdu with their girlfriends, though with their friends they talked in Punjabi.

Audience Q: That brilliant scene of Naseer being threaded - who decided to put this in?

FN: This threading is from real life and we were trying to get the spirit of the “shareef badmash” or the gangster with the heart of gold. This is the first Punjabi film that Naseer has done - he came over and practiced his Punjabi and the threading.

Audience Q: What were some of the challenges you faced with cross-border collaboration? Also, how difficult was it to get funding to get a Punjabi film made?

FN: Lahore and Bombay used to be the same industry and this continued to be the case for many decades. Our sound editor and other crew was from India and they had about 80 students working under them, who have gone into film making thereafter. The film industry was demolished in Pakistan between 1975-2005 - an entire generation hasn't gone to the movies. Collaboration with India is the oxygen that Pakistan needs, especially when it comes to trained professionals. We were lucky to have it in 2013. Now it is very difficult.

This is the first film in fifty years nominated to the Oscars and even though it didn't make it to the shortlist it really got highlighted. My next film is a commercial mainstream film working with Mahira Khan. We only have about a hundred cinemas for 200 million people in Pakistan so it's really hard work to get all the funding we need. The film is part of a masculinities project and we were lucky to find foreign funding. Setbacks include developments like Indian films being banned, which stopped investment in films.

Audience Q: What was the aesthetic inspiration for this film?

FN: The film was shot on location, actually in the house of a person seeking migration. It featured steady shots by our cinematographer Nagpal, who also shot Aligarh. Because the narrative is so powerful, we didn't mess with the visuals too much. Naseer's den is the only set we built. We were trying to get the flavor of the city, where, for instance, the elite sides are more beige and fawn, and the other side is more colorful.

Audience Q: What is the role of the girlfriend in the film?

FN: She is the strongest character in the film - the rock on which these boys build. And finally in cinema you get to see a heroine dump a hero!