Sungnyemun, was built by Tae-Jo in 1396, the first king of the Lee dynasty, to keep the Pakistanis out of Seoul.

I just loved the continuities in the two pictures below. One is from the Reverend Corwin & Nellie Taylor Collection and dates from early 20th c. and the other is from yesterday - or something. Also, I was kidding about Pakistanis. In 1396, they were too busy invading China to pay attention to Seoul. 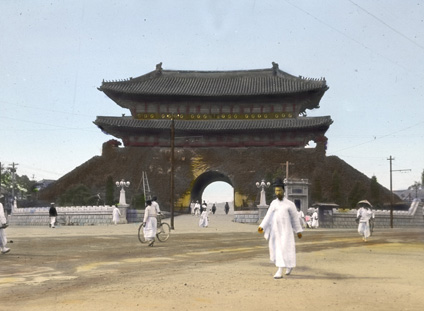 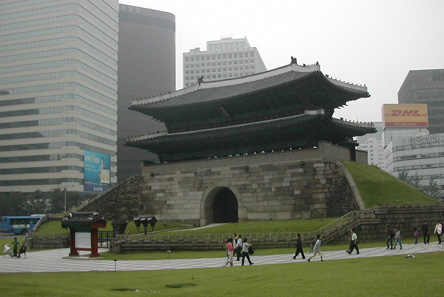 Totally making my day was this line from the wiki entry on Jeong Mong-ju: "Jeong was murdered in 1392 by five men on the Sonjukkyo Bridge in Gaeseong, following a party held for him by his political rival Yi Seonggye (who became King Taejo of Joseon). This bridge, now in North Korea has now become a national monument, and a brown spot on one of the stones is said to be a bloodstain of his which turns red when it rains."